WCFJC seeks to increase economic empowerment and improve the quality of life among low-income women in Africa. Project work has begun in Uganda, East Africa and will later spread throughout the continent of Africa. 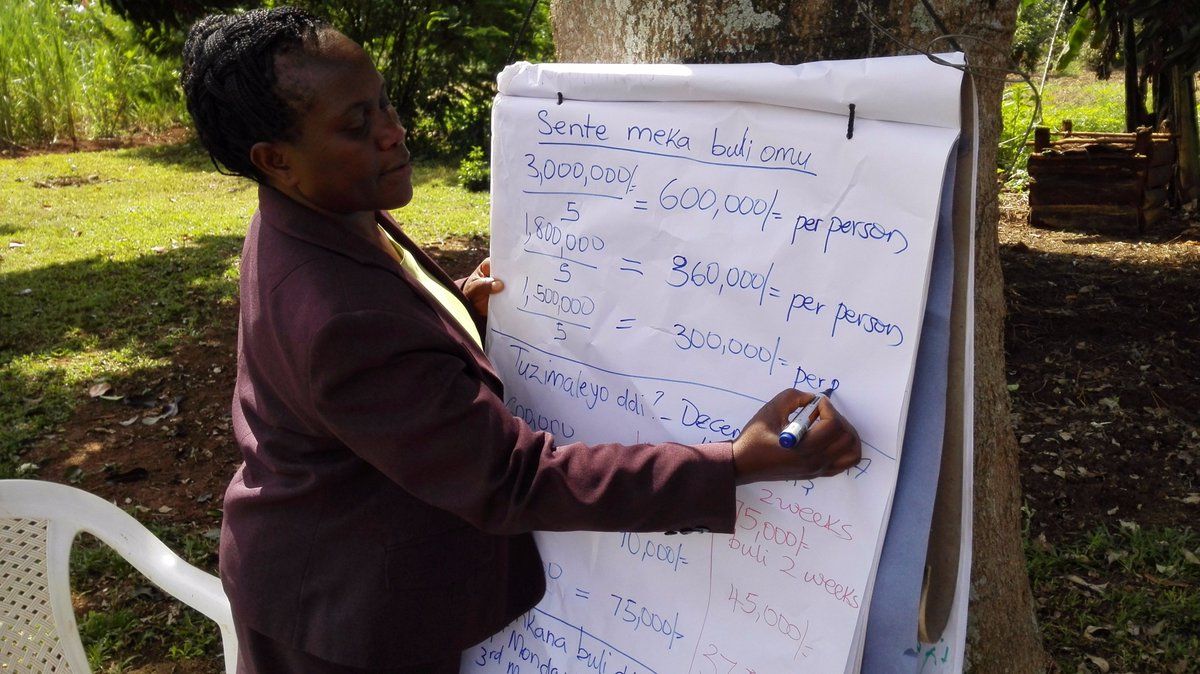 When Dorothy brought me on board she was interested in seeing the ladies work together. We had to come up with some group dynamics training which wound up being our first module; group dynamics and leadership styles. Under group dynamics we were looking at cohesion in groups so we began to set the stage for the small groups we wanted formed.

For the second training under this module we explored different group activities that the newly formed small groups can take on. Different ideas were discussed; starting incoming generating activities like soap making, crafts, charcoal. Saving was another idea which we focused on, because saving in their small groups would encourage loan repayment. The saving would also help with capital for them to start their income generating activities.

We went on to look at the different types of saving. The village saving and loan associations, the circles, table banking, cash round or even ‘communal’ saving methods which involve pooling money and resources together when someone in the group has a problem or is celebrating something. We were not forcing the women into a particular form of saving, we wanted them to decide as a group what method would work best for them. Many of them opted to continue saving through Women’s Center, as they had already started saving there, but as a group there were more options. One of the groups, Tulikirala Women’s Group, donate what they can and use the money collected to buy tents for hire. The money generated from the tents could be saved again and invested in another product. There is another group, CORE Women’s Group, that has invested in soap; they pooled money together and bought the materials to make soap and baskets. They each contribute 2000 Ushs (50cents). Each group decides what activity they would like to do together and the ways they will finance that activity.

Another topic explored was investment. Because sometimes saving with no end goal in mind can become a bit redundant. I have been in many savings groups too, and sometimes the end question is ‘Okay so we save, then what?’. A solution to this is investment. An individual can borrow from the savings and invest alone or they can do it as a group. Investing makes it a cycle; so the ladies save, then invest, then need to save some more to fill the gap.

We recently went back to revise and delve deeper into group dynamics and leadership as a whole. This is because a lot of the groups formed in the beginning had began to disband. So we needed a solution. We allowed space for various questions; is it bad to disband? Is it bad to have conflicts in the group? We explored group development. Initially when groups get together they are all happy to be in the group, everything is rosy. But along the way they will have disagreements; some will not pay, others will be late, others will not attend meetings, others will leave. What do you when these present themselves? We wanted to show the women that it is possible to push through these disagreements. Sometimes they happen, but you can work through them together. You reach a point of normalization as part of group development. We also looked again at leadership styles. How do you choose your leader? If the leader is problematic it will filter into the group.

Picking the topics for the trainings will vary with each quarter. Often it depends on the active participants at any given moment, and on the ways in which the women seem to be struggling.